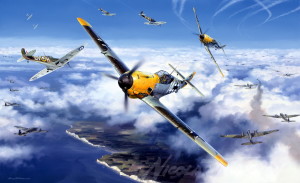 The Wehrmacht (Defence Force)—from German: wehren, to defend and Macht, power, force, cognate to English might) was the unified armed forces of Germany from 1935 to 1945. It consisted of the Heer (army), the Kriegsmarine (navy) and the Luftwaffe (air force). The term Wehrmacht generically describes a nation's Armed Forces, thus, Britische Wehrmacht denotes “British Armed Forces.” The term Wehrmacht is in Article 47 of the 1919 Weimar Constitution, establishing that: Der Reichspräsident hat den Oberbefehl über die gesamte Wehrmacht des Reiches (“The Reich's President holds supreme command of all armed forces of the Reich”). From 1919, Germany’s national defence force was known as the Reichswehr, which name was dropped in favor of Wehrmacht on 16 March 1935. The name Wehrmacht even in Germany is generally considered a proper noun of the 1935-45 armed forces, being replaced by Streitkräfte in its original meaning; however, this was not so even some decades after 1945. In English writing Wehrmacht is often used to refer specifically to the land forces (army); the correct German for this is Heer. [Wikipedia] 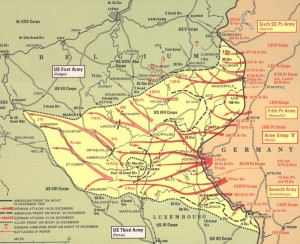 The Battle of the Bulge (16 December 1944 – 25 January 1945) was a major German offensive campaign launched through the densely forested Ardennes region of Wallonia in Belgium, France and Luxembourg on the Western Front toward the end of World War II in Europe. The surprise attack caught the Allied forces completely off guard and became the costliest battle in terms of casualties for the United States, whose forces bore the brunt of the attack, during all of World War II. It also severely depleted Germany's war-making resources and was the country's final offensive operation of the war. END_OF_DOCUMENT_TOKEN_TO_BE_REPLACED
April 16, 1945-- May 2, 1945 The Battle of Berlin, designated the Berlin Strategic Offensive Operation by the Soviet Union, was the final major offensive of the European Theatre of World War II. Starting on 12 January 1945, the Red Army breached the German front as a result of the Vistula–Oder Offensive and advanced westward as much as 40 kilometres (25 miles) a day through East Prussia, Lower Silesia, East Pomerania, and Upper Silesia, temporarily halting on a line 60 km (37 mi) east of Berlin along the Oder River. When the offensive resumed, two Soviet fronts (army groups) attacked Berlin from the east and south, while a third overran German forces positioned north of Berlin. The Battle in Berlin lasted from 20 April until the morning of 2 May. [Wikipedia]
January 17, 1945
August 20, 1944 -- February 13, 1945
July 5, 1943 -- August 23, 1943 The Battle of Kursk was a World War II engagement between German and Soviet forces on the Eastern Front near the city of Kursk, (450 kilometers or 280 miles southwest of Moscow) in the Soviet Union in July and August 1943. The German offensive was code named Operation Citadel (German: Unternehmen Zitadelle) and would lead to one of the largest armoured clashes, the battle of Prokhorovka, in history. The German offensive eventually provoked two Soviet counteroffensives code-named Operation Polkovodets Rumyantsev (Russian: Полководец Румянцев) and Operation Kutuzov (Russian: Кутузов). The battle saw the final strategic offensive the Germans were able to mount in the east, and the decisive Soviet victory gave the Red Army the strategic initiative for the rest of the war. [Wikipedia]