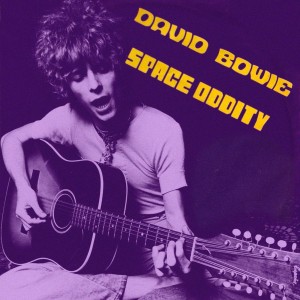 "Space Oddity" is a song written and performed by David Bowie and released as a music single in 1969. It is about the launch of Major Tom, a fictional astronaut; its title alludes to the film 2001: A Space Odyssey. The lyrics have also been seen to lampoon the failed British space programme.The song appears on the album David Bowie (also known as Space Oddity). The song was awarded the 1969 Ivor Novello Award, together with Peter Sarstedt's "Where Do You Go To (My Lovely)?". "Space Oddity" became so well known that Bowie's second album, originally released as David Bowie in the UK (like his first album), was renamed after the track for its 1972 reissue by RCA Records, and has since become known by this name. "Space Oddity" gained in popularity after it was covered by astronaut Chris Hadfield, who performed the song while aboard the International Space Station in 2013. Bowie would later revisit his Major Tom character in the songs "Ashes to Ashes" and "Hallo Spaceboy". German singer Peter Schilling's 1983 hit "Major Tom (Coming Home)" is written as a retelling of the song. [Wikipedia]
END_OF_DOCUMENT_TOKEN_TO_BE_REPLACED
Listen to the original song by David Bowie.